By way of a mention on Techmeme today, I learned that WordPress now allows you to tweet out a blog post as a linked thread of tweets. You can do this either using the hosted WordPress.com solution – or using self-hosted WordPress with the Jetpack plugin.

The Jetpack plugin included this feature as part of the 9.0 release on October 6, 2020.

All you need to do to use it is to:

You can see the setting you need to choose in this screenshot:

In theory, I’m supposed to be seeing little marks in the WordPress editor showing me where each tweet would end. I see a Twitter symbol, but it seems to move with me, and I know I have already written way more than can be in a single tweet.

(I see now that when I go back and click through the text, the Twitter symbols do show me where each Tweet will begin and end.)

My initial thought was sort of … why would I want to use this? Typically the writing I do for a blog post is very different – and often much longer – than I want for social media.

However, as I’ve thought more about it, there is one use case I could see for this. Sometimes I know in advance that I want to create a thread on Twitter.

If I just go and create the thread on Twitter, there are a couple of issues:

Writing a post inside of WordPress allows me to solve both of these issues. I can easily write out text in advance, and, regardless of whatever Twitter may or may not do with my content, I have a copy on my own website.

What do you think? Will you use this new WordPress feature to create Twitter threads? (Or is this just something that will clog up Twitter timelines?)

UPDATE #1: As advertised, Jetpack very nicely created a thread on Twitter. It also added a final tweet that points over to this blog post where you can read the whole thread:

This obviously removes the need to use one of the various services that gather all the tweets in a thread so that you can read them on a single page (and share the link to that single page). Very nicely done.

Using the details element via a Gutenberg block

As I wrote about last year, the HTML5 “details” element is a very useful and lightweight way to create a collapsed list of questions or other content. Investigating possible options, these kind of parts of a web page seem to be often called an “accordion”. There are a number of accordion plugins, but almost all the ones I could find use some kind of additional JavaScript scripts to make the accordion.

Now, obviously I would need to style it a bit more to have it fit in here well, but it’s very easy to add in Gutenberg. It also has the ability to be added in the Classic Editor, too.

Experimenting with block patterns in WordPress 5.5

Here I am just inserting a “block pattern” in WordPress 5.5 that has two buttons side by side:

The point of a “block pattern” is it lets you insert a pre-defined and pre-configured set of blocks. You then can edit those blocks and set them up with their unique properties.

This is VERY different from “re-usable blocks”, which can also be inserted easily in different parts of your site… but they all share the same value. So you could have, say, your contact info or number of members in a re-usable block. Insert that block all across your site. Update it in one location, and it is updated everywhere.

Instead a “block pattern” is more of a “template”… “here are some blocks to get you going on this page and now you can do with them what you will.“

I can see a HUGE use case for this in the pages we create at my employer. We often create new landing pages or event pages where we use some standard patterns. Obviously we can just “duplicate” an existing page if it is a close match, but often we are building new pages where we also want to bring in elements used on another page. Now, we have built our own blocks for some of our common elements. But a “block pattern” allows us to have a group of blocks that we can easily add to the page.

The challenge is that adding block patterns in WordPress 5.5 primarily involves adding code to your theme or creating a custom plugin.

However, I see there is now a “Block Pattern Builder” plugin that needs some investigation…

I’m first going to just embed a video without the lazy loading:

To make this work, I’m using a HTML block in the WordPress editor so that I can put in the exact iframe copied from YouTube.

Next I’m going to run a couple of speed tests on this published post.

Then, I’ll come back and add ‘loading=”lazy”‘ into the iFrame code and repeat the tests. Let’s see what we learn!

My first lesson was that an IFRAME from YouTube really doesn’t load much in by default. Just a very small web player, image, etc. This makes sense. The larger video is only loaded when the user hits this play icon.

So, in this instance, the lazy loading doesn’t really save that much at all. This would be far more effective with an IFRAME that loaded in a large object of some form.

That said, I did see a very small difference in the before and after tests.

Using WebPageTest.org, the before (i.e. non-lazy-loading) test had a Largest Contentful Paint (LCP) of 1.279 seconds and a total time of 3.034 s.

That change is TOO tiny to really be sure it was a result of the lazy loading. It could, quite honestly, be related to latency or the speed of the test platform.

BUT… I also did tests with Firefox’s Developer Tools (the network inspector) on my local system and similarly saw a very small difference between the results before and after.

So it’s something I’ll try to remember when I’m using iframes to embed content from other sites. In other instances, it may make more of a difference.

So this is just an experimental post (because that is what this site is all about!).

Things I am looking forward to over the next few weeks:

Sadly, it does not look like the team fixed the issue where you cannot change the text color of List blocks. To be clear, they did NOT say they were going to! I was just wondering if one of the other features would help with that.

The table functionality keeps getting better and better… although I can’t seem to find the header menu to switch between edit and select tools.

My menu when inside the table does not look like what I see in the Github issue. (Perhaps I have to use a different WordPress theme?)

All in all very cool stuff

I was rather amazed today to discover the <details> element. Where had this been?  Clearly I’ve not been keeping up with the evolution of HTML! 😞

Per the Mozilla documentation of <details>, the element is supported by all modern browsers except Microsoft IE and Microsoft Edge. It does seem that MS is working on adding this to Edge, though.

Hat tip to someone on Mastodon who pointed me to:

This is just  test of using the new Gutenberg editor version 1.6 on my iPad.

Still, it is pretty cool! 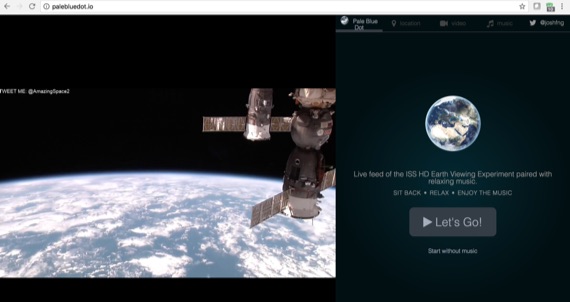 If you’re looking for something beautiful to have on a monitor or other device in the background of, say, a home office, check out http://palebluedot.io/

It is a live video feed from the International Space Station paired with some ambient / relaxing background music. You can of course turn the music off.

Deep Dark Blue is powered by WordPress and the free Bloxy Two theme.